To lead his football team to more victories.

To pick on the noobs.

Jock is a very self-centred person and enjoys picking on the Noobs and anyone else he lacks respect for. He loves sports, especially football. He is egotistical and is very popular. He is however quite stupid and known to be honest, while also admitting when the Noobs do something to surprise him.

Jock is a handsome, young teen. He has golden, blond hair with lighter streaks and he has fair skin. Jock is muscular and has a strong chin. He often wears a red jacket with cream, white sleeves. If he isn't wearing that then he is known to wear a mainly red t-shirt with white and navy stripes with the number '8' on it.His underwear is a pair of whities, Jock also wears light brown jeans and green and white sneakers.

Jock and the supernoobs don't get along very well. Being a bully, he often picks on them for fun. 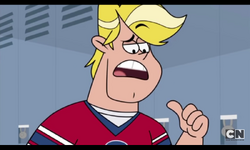 Retrieved from "https://super-noobs.fandom.com/wiki/Jock_Jockerson?oldid=33749"
Community content is available under CC-BY-SA unless otherwise noted.