To Noob or Not to Noob

To Noob or Not to Noob is forty-second episode of Super Noobs.

The Noobs ponder over whether or not to use their battle ball powers during school for personal gain. 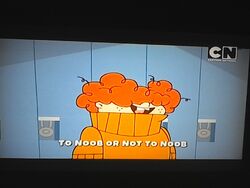 Retrieved from "https://super-noobs.fandom.com/wiki/To_Noob_or_Not_to_Noob?oldid=26158"
Community content is available under CC-BY-SA unless otherwise noted.